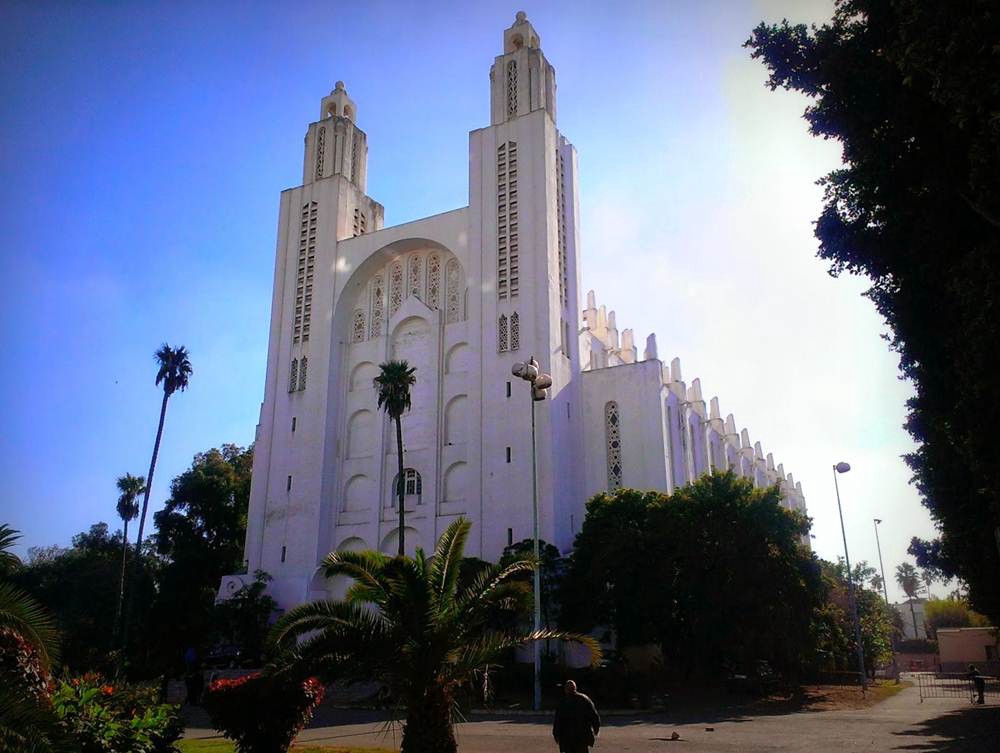 The Catholic Church in Morocco (Arabic: “الكنيسة الكاثوليكية في المغرب, Alkanisat alkathulikiat fi Almaghrib”), refers to the institutional body and its local community having Catholicism as its religion in Morocco.

The Catholic Church in Morocco has two archdioceses that are not subject to national jurisdiction within a national church but are subject to the universal jurisdiction of the pope, bishop of Rome, within the “Universal Church. ”

The two archdioceses, with their seats in Tangier and Rabat, include all the parishes in the territory of Morocco. In close communion with the Holy See, the bishops of the dioceses in Morocco are members of the North African Bishops’ Conference, which brings together the episcopates of Morocco, Algeria, Tunisia and Libya. The Catholic Church is authorized by the constitution of Morocco. The Catholic Church is a minority religious community in Morocco.

The state religion in Morocco is Islam. Two articles of the constitution provide a framework for freedom of religion, thus authorizing the Catholic Church:

Article 1 5: “the nation relies in its collective life on unifying constants, in this case the Muslim religion”.
Article 36: “Islam is the religion of the State and that of the Moroccan people, which guarantees to all the free exercise of worship.

In 2017, the Moroccan Supreme Council of Ulemas decreed that only those who “betray their country” are subject to the death penalty and no longer apostates who change their religion.

The building was built in 1961 according to the most modern techniques of the time by the Spanish architect Luis Martínez-Feduchi Ruiz, while keeping a classical vocabulary

The apse has stained glass windows by the glass artist Arcadio Blasco, a native of Alicante. It is one of the major attractions of the cathedral.
Interior of the cathedral. The remains of Father José María Lerchundi, a missionary in Morocco for more than thirty years, are in the crypt.

Notre-Dame-de-Lourdes Church is a Catholic parish church located in Casablanca, Morocco. It was built in 1954 by Achille Dangleterre and the engineer Gaston Zimmer1 and is the second church in Casablanca after the church of the Sacred Heart which is no longer used for worship today.

It is particularly frequented by many faithful from sub-Saharan Africa.

DISCOVER OUR TOURS TO SAHARA DESERT IN MOROCCO

Our most popular Morocco Sahara Tours . The trip from Marrakech is rich in scenery and includes an unforgettable stay in a Desert Camp.

A great experience starting from Fes including camel trekking and at least one night in a tented desert camp in the Merzouga Desert.

Our experts can create exceptional tailor-made experiences for our clients. Contact us and we´ll plan your perfect trip in Morocco.

There are no reviews yet. Be the first one to write one.

This website stores  our own and third party cookies on your computer. These cookies are used to collect information about how you interact with our website and allow us to remember you. We use this information in order to improve and customize your browsing experience and for analytics and metrics about our visitors both on this website and other media. To find out more about the cookies we use, check out our Cookie Policy.
If you decline, your information won’t be tracked when you visit this website. A single cookie will be used in your browser to remember your preference not to be tracked.
Necessary Always Enabled
Necessary cookies are absolutely essential for the website to function properly. This category only includes cookies that ensures basic functionalities and security features of the website. These cookies do not store any personal information.
Non-necessary
Any cookies that may not be particularly necessary for the website to function and is used specifically to collect user personal data via analytics, ads, other embedded contents are termed as non-necessary cookies. It is mandatory to procure user consent prior to running these cookies on your website.
SAVE & ACCEPT